Physics is non-theistic, but it is not antithetical to theology. Physics does not "equate" to an antithetical approach. It simply isn't even in the same arena.

If I use a hammer to crush a human skull, you can tell me by examining the skull about point of impact, angle, force used, damage to skull and brain, etc.

In order for two discussions to be antithetical, they have to occupy the same part of the universe, and these two don't. One discusses objects, the other discusses the persons that were involved in the use of the objects.*

To discuss the morality of the act, I would need to know if one of the two was an aggressor (perhaps it was an accident?). If one was an aggressor, which one? Were they both aggressors? What caused the aggression? Were both alive at the time of the event, or was the one with the crushed skull already dead? Did the one who crushed the skull KNOW that the victim was already dead? What aspects of the moral act are known (act, circumstances, intent)? The question set is quite large, and this is just an outline.

Given what I've said, we only know the physical act. We can't judge the morality without knowing the other two aspects of the moral act.

If physics is theistic, then it HAS to possess tools that judge person-to-person relationships, because that is the ONLY way to discuss God. God is three Persons, the divine Persons are distinguished ONLY by their interpersonal relations, and our personhood is founded on our relationship with the Three Persons.

Similarly, it is incorrect to say that physics admits teleology, a discussion of man's proper end. Sure, the PHILOSOPHY which EMPOWERS physics admits teleology. No argument there. But that is different than saying physics itself admits a teleology. Physics is a tool. The idea of "tool" is a philosophical concept, but the technique by which the tool operates in the world is not a philosophical concept, it is an act that physics describes without regard to teleology at all.

So, a hammer is an object which may drive a nail or crush a skull - two different philosophies are embodied in these two different uses of the tool, but the actual operation of the object in the world has no philosophy at all. The hammer, as it strikes an object, simply acts to concentrate force into a point. That is not philosophical. It is simply mindless action, action that can happen without any operator at all. "The hammer hit the nail" describes action, but not teleology. "The carpenter swung the hammer, hitting the nail"... now teleology begins to be described.

The Logic of the Mob

Cops exist to protect criminals from angry mobs. Cops also protect angry mobs from each other. The Kenosha rioters don't want cops.
They got what they wanted - no cops.
As a result, the rioters got shot by someone from the other side. So, rioters got what they wanted - direct violence.
The guy who shot them got what he wanted - direct violence.
Both sides embrace a different viewpoint about violence than you or I do, but that's America - a melting pot of viewpoints, right? So, why aren't we celebrating diversity here? Angry mobs shooting each other looks like a win-win for anyone involved who isn't a hypocrite.

And, from that point of view, why is it wrong for the cops to get in on the game and shoot whoever they want? I mean, if the rioters TRULY don't want cops, then the cops are just another angry mob willing to go mano-a-mano with them. For people who embrace violence, what's not to like?

Seriously, when people in cop uniforms shoot them, why do rioters get upset?
They got what they wanted, good and hard - no cops.

Posted by Steve Kellmeyer at 9:59 PM No comments:

Meditation On the Death of a Friend

Look up into the clear night sky and you will a beautiful thing.

Stars are born, grow for billions of years, live for billions of years, then collapse and die. And from their ashes, you and I are born. You and I, we are dead stars. And, you and I, we are more beautiful than stars, for we are not just things, we are persons. We are able to live life with joy that stars never have, we are able to burn with love no star's fire can cool, we are able to form molten memories that even a star's own sun-hot forge can never pour out.

But, in order for us, you and I, to be born, a star had to die. A beautiful thing had to die so that something, someone, even more beautiful could be born.

And, as it is with stars, so it is with you and with me. Although you and I, and every person, has within us this unutterable beauty of joy and love and memory, we each must die so an even more beautiful being, an even better version of ourselves, can be born.

So, my friend, for your children, this thought:  she wants you to live long, grow strong, and remember her.

And, my friend, for your children, this promise: the beauty that is to come is even greater than the beauty she gave to you.

And, my friend, for your children, this word: Live.

Posted by Steve Kellmeyer at 1:18 PM No comments:

Arguing for or against a policy by the current president (no matter who he is) by saying "But Obama did it!" is an atrociously bad argument.

Liberals don't care if the current White House occupant matches their man's actions, because their man can never do any wrong, while anyone NOT their man is wrong simply by the fact that he isn't their man.

Pointing out their man did something wrong doesn't convince them of anything, because that's not where their difficulty lies. Their difficulty lies in the fact that anyone who is NOT their man is, by that fact, illegitimate. For leftists, the "Obama did it!" argument falls on deaf ears.

For conservatives, anytime the president does something that matches Obama's or Clinton's moves, we should start from a position of deep, deep concern. Obama and Clinton were idiots.

Generally speaking, we never want the current White House occupant to "ditto" an Obama/Clinton policy. If he does, he better have a damned good reason, and I want to know what it is before I approve of it.

Now, sometimes he does have a good reason to continue a policy. For instance, Obama started the removal of USPS mailboxes, and Trump continued it. Given the fall-off in USPS mail, it makes good business sense, I support that activity no matter which president is involved.

But then there is Obama building and stocking cages with illegal immigrant kids, and Trump re-filling the cages. My friend, as a Catholic, nothing about that activity is acceptable to me, and I honestly don't care WHO does it. That has to stop.

Posted by Steve Kellmeyer at 9:49 AM No comments:

There are different opinions on this matter, none of which are clearly correct. The basis for questioning "natural-born citizenship" is generally founded on theory that the Founding Fathers used Emerich de Vattel's Law of Nation as a basis for the terminology they employed in the Constitution'. According to Vattel, a natural born citizen differs from naturalized citizens in that the natural born citizen fulfills two necessary conditions:

An additional argument has occasionally been used that a candidate may not possess dual citizenship. None of these questions concerning the meaning of the clause have ever been completely settled.  This is, strictly speaking, a question of law, not lineage. Posing the question is not a commentary on separate issues (e.g. the question itself is independent of the candidate's race, culture or worldview).

Below is a list of candidates whose eligibility has been questioned on the basis of the Constitution's "natural-born citizen" eligibility clause. As can be seen, this question has been around for well over a century, with no resolution in sight :

Posted by Steve Kellmeyer at 6:39 PM No comments:

BLM started July, 2013, but did not become nationally recognized until July 2014. In 2015, Black Lives Matter co-founder Patrisse Cullors said she and her fellow organizer, Alicia Garza, are “trained Marxists”. The book publisher Penguin Random House has said Garza, an author, "describes herself as a queer social justice activist and Marxist." Included on its list of beliefs is one consistent with Marxism:

"We disrupt the Western-prescribed nuclear family structure requirement by supporting each other as extended families and ‘villages’ that collectively care for one another, especially our children, to the degree that mothers, parents, and children are comfortable."

Marx (and Engels, the man who bankrolled him), was an avowed racist who deeply disliked black people, regularly referring to his own son-in-law and his political enemies with racial slurs. Marx and Engels repeatedly and explicitly said their goal was to destroy the family so that everyone held allegiance only to the state.Patrisse Cullors and her BLM co-founders, were the protégé of Eric Mann, former agitator of the Weather Underground domestic terror organization, and spent years with him, absorbing the Marxist-Leninist ideology that shaped her worldview. In 1968, Mann was a coordinator for Students for a Democratic Society, which eventually became the terrorist organization, the Weather Underground. The Weather Underground was led by Bill Ayers and Bernadine Dohrn, who called for terrorism, seeking the overthrow of the US government. Ayers's close friend Terry Robbins, and Ayers's girlfriend, Diana Oughton, famously blew themselves up while making bombs to attack government buildings. Bill Ayers participated in the bombings of New York City Police Department headquarters in 1970, the United States Capitol building in 1971, and the Pentagon in 1972. He dedicated his autobiography to Sirhan Sirhan, the man who assassinated Robert Kennedy.

As a member of the Weather Underground, Eric Mann was himself sentenced to two years in prison for conspiracy to commit murder and assault with intent to commit murder. So, Marx was an avowed racist, Eric Mann was a Marxist terrorist, and Mann trained the founders of BLM in Marxist ideology.https://www.youtube.com/watch?v=rdpIIiBe7Wc
Posted by Steve Kellmeyer at 3:12 PM No comments:

St. Peter Damian: “God in his wisdom has provided man with natural forks – his fingers. Therefore it is an insult to Him to substitute artificial metallic forks for them when eating.”

Have you gone to confession for using silverware?

Posted by Steve Kellmeyer at 1:56 PM No comments: 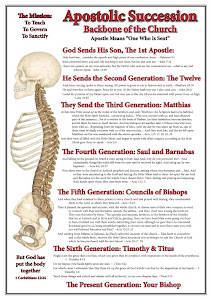